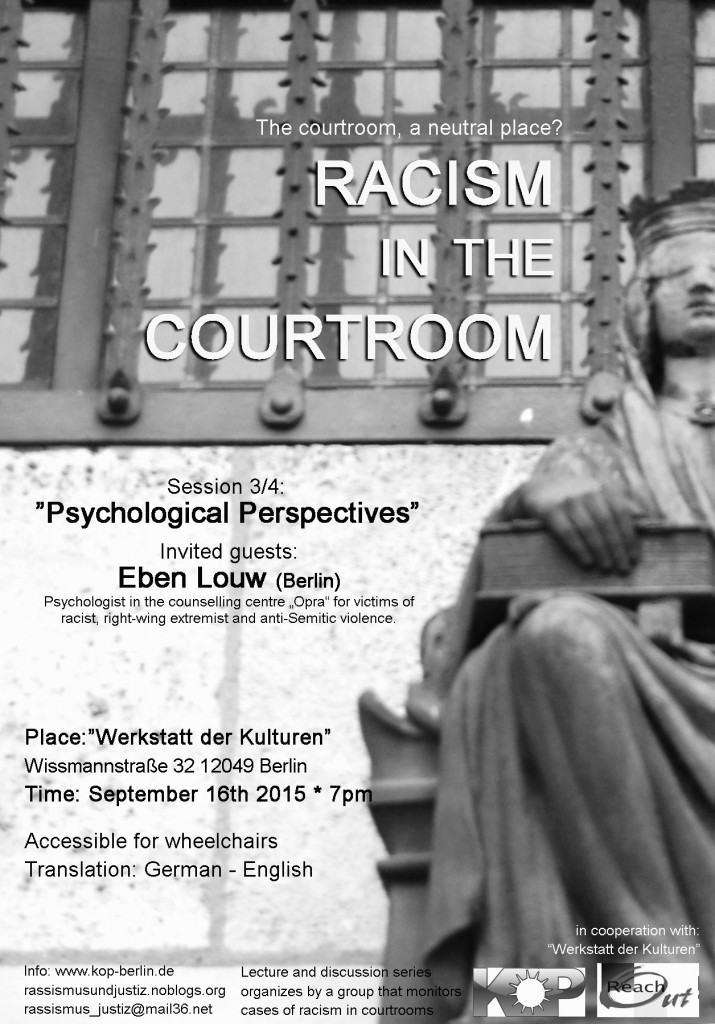 The aim of the series of lectures “racism in the courtroom” is to open up a space to criticise racism as an everyday phenomenon in the criminal justice system. Even though it is increasingly acknowledged, that racism can be found at many levels of society, the judiciary usually remains untouched.

A similar exclusion is made in the professional debate in psychology:
Often migration is problematised as psychological risk factor, but without hardly considering the role of everyday experiences of racism in this context. In our third lecture we would like to bring issues together for discussion. Assuming that the supposedly neutral judiciary is permeated by racism and other power structures, we want to analyse to what extent the institutions of justice are an unsettling factor for persons negatively affected by racism.

The event is organised by a group that monitors racism in the judiciary (Prozessbeobachtungsgruppe Rassismus und Justiz). We cooperate with ReachOut (counselling centre for victims of racist, right-wing extremist and anti-Semitic violence) and KOP (campaign for victims of racist police violence) and have regularly been observing trials for more than a year, posing the question, what effects racism has on/within the judiciary in Germany.

Eben Louw is working as psychologist in the counselling centre „Opra“ for victims of racist, right-wing extremist and anti-Semitic violence.

Daniel Bartel is working as psychologist at an office against discrimination in the region of Saxony.